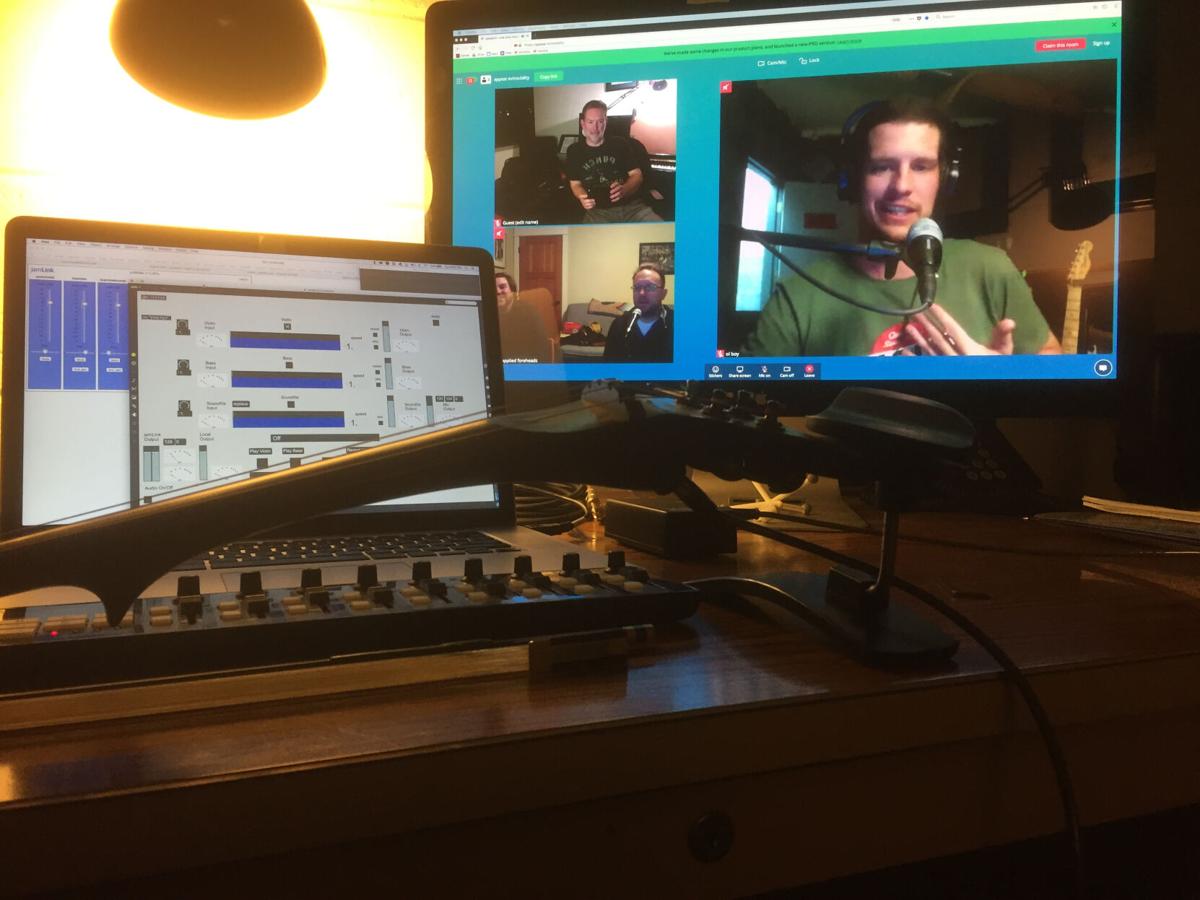 Violnist Charles Nichols, who lives in Virginia, plays along with his Montana bandmates through a software program.

Violnist Charles Nichols, who lives in Virginia, plays along with his Montana bandmates through a software program.

While many bands haven’t been able to rehearse together in several months, one group with members based in three cities is uniquely built for the moment.

Charles Nichols, their violinist and a computer music composer, moved to West Virginia to teach. He still wanted to play with the rest of the line-up, Jay Bruns (electronics, percussion), and Ben Weiss (keyboards, vocoder), who live in Missoula. Guitarist-keyboardist Clark Grant lived here, too, before resettling in Butte.

After experimenting, they’ve refined their set-up for practices, live performance and studio albums, even using it to produce an archive of material to mine for new ideas.

Bruns, who produces digital visual art and works in IT, said he likes to use tech to solve problems creatively. Making music is no different.

"The fact that we play music utilizing the internet also presents constraints, and the constraints are nice to influence creativity and give us challenges," he said.

Their new single, “Everything Utopian,” was recorded live, with some postproduction, from their respective cities, with a free software program called JamKazam. (They’re switching over to a different set-up, JackTrip, soon. The pandemic has increased interest in JamKazam and, with it, reliability issues.)

They grew comfortable enough to use the software live years ago, and have performed at the Missoula Art Museum and the VFW, with the Montana members on stage and Nichols piped in remotely.

“Everything Utopian,” recorded last November and given its timely title before COVID-19, is a good example of the style the group has developed. Over the course of 24 minutes, gently arcing violin lines weave together with electronic synths and drums. It has the surface-level serenity associated with ambient music but shifts constantly and gradually evolves over time.

Their weekly Tuesday night practices might involve pure improvisation or reworking material for an album — two very different processes, the former is more open-ended, and the latter more meticulous. They record almost everything and can harvest it for ideas, communicating through a Slack channel for the group.

Any bands interested in trying the software should be patient with the software and themselves. Weiss said part of their chemistry depends on being present and deep listening which requires some adaptation when your bandmates aren’t in the room. The technology isn't perfect either, and the software can experience delays if an internet connection falters. In general, though, Nichols said it’s “equivalent to playing in a very large space,” the same way that symphonic musicians think about the effect of performing a concert hall.

Several years ago, Bruns switched from acoustic drums to electronic percussion, which helps create a steadier pulse if they have any setbacks. He uses software to generate less predictable forms, which “adds a lot of dynamic elements to an otherwise boring, soulless drum machine march,” he said.

Weiss said he sees the online practices as a space to hone listening skills versus performance skills. They’re playing at a much lower volume without club-level decibels, so he has time to pay close attention to what’s happening, and ask what his particular instrument can contribute at any given moment.

They’ve completed their new album, “Megacycles,” with a release planned this summer or fall once the records are pressed. When all is said and done, their preferred way to play is with the Montana members on a stage and Nichols virtually. They’re applying for online music festivals, too.

They’d like to have a local release show if possible, or possibly all four piped in and playing online and maybe learning about what's available.

Q&A: Rain's Steve Landes on inhabiting John Lennon and how, yes, the Beatles are underrated