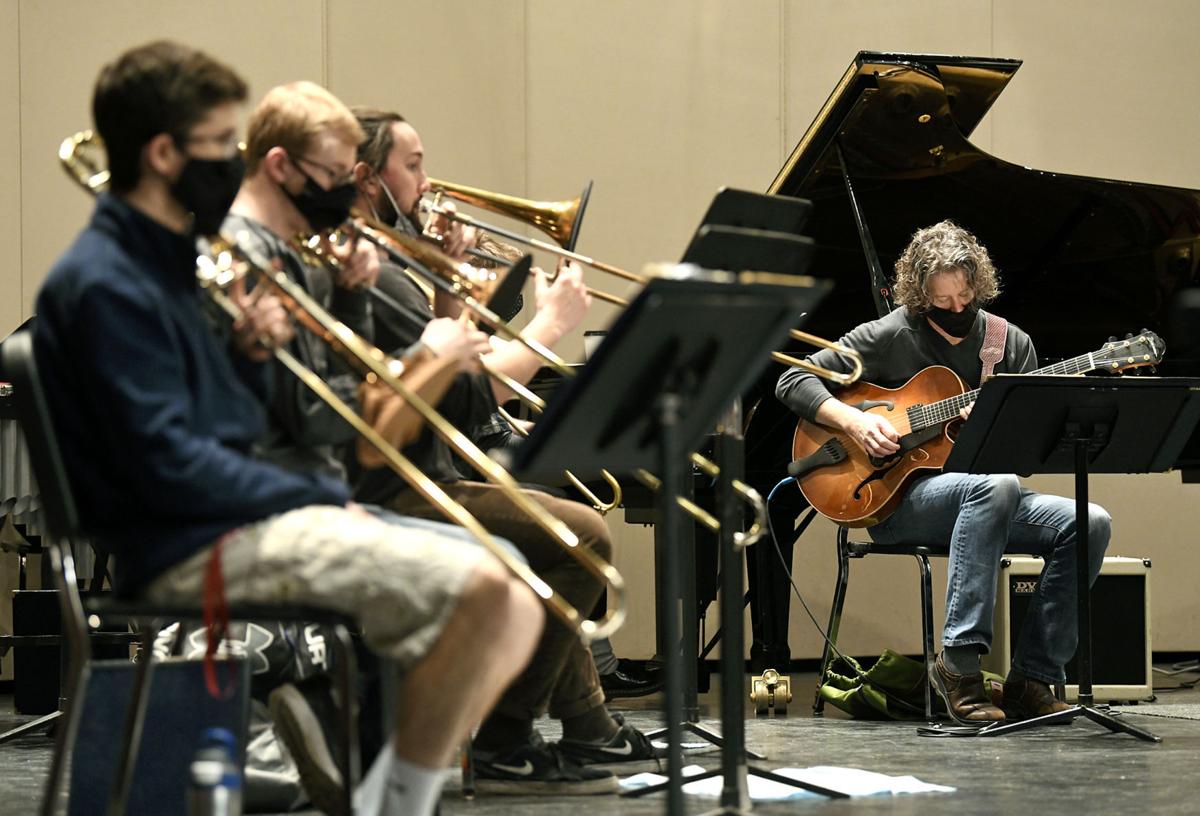 Guitarist and University of Montana faculty member Jeff Troxel rehearses with students and other faculty on Friday for the Buddy DeFranco Jazz Festival. 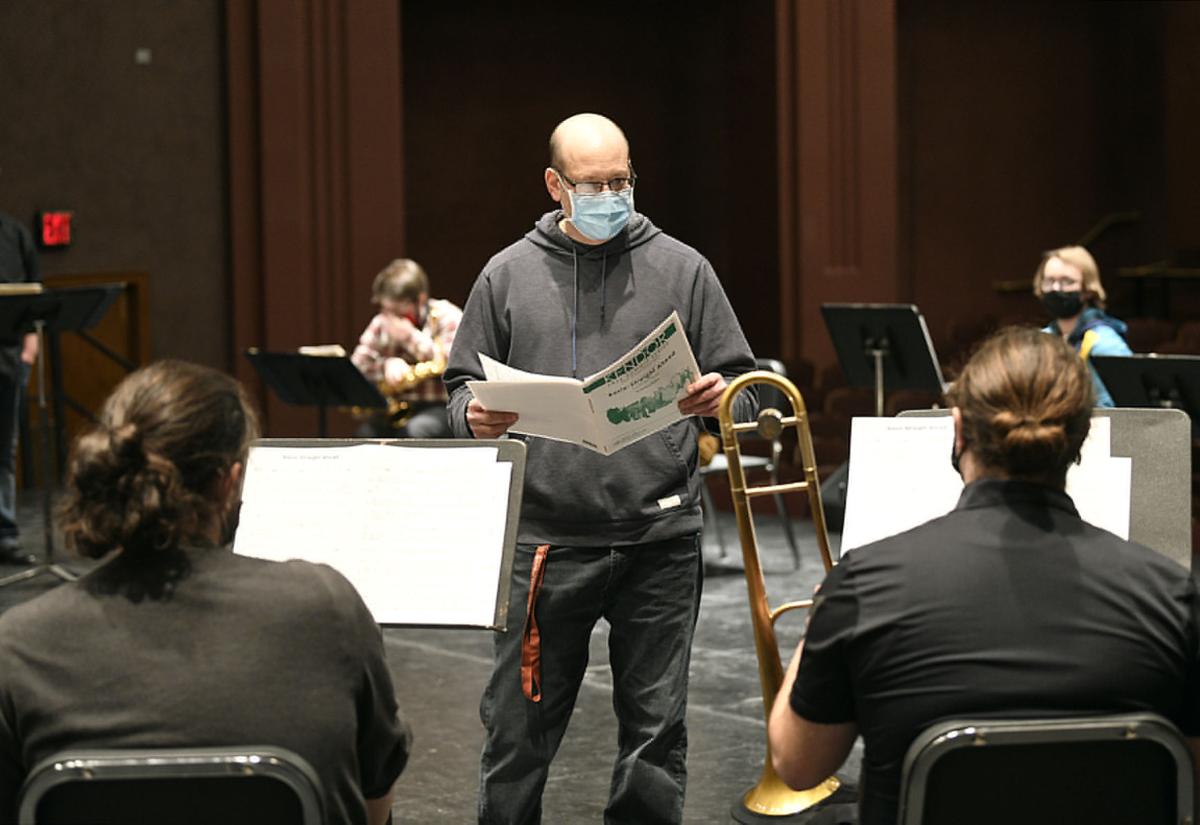 Rob Tapper, the program and festival director and professor of trombone at UM, directs the jazz ensemble during rehearsals at the Dennison Theatre on Friday.

Guitarist and University of Montana faculty member Jeff Troxel rehearses with students and other faculty on Friday for the Buddy DeFranco Jazz Festival.

Rob Tapper, the program and festival director and professor of trombone at UM, directs the jazz ensemble during rehearsals at the Dennison Theatre on Friday.

The swing is real and the delivery is virtual this year at the Buddy DeFranco Jazz Festival.

The 41st annual event from the University of Montana Jazz Program adapted its programs for remote, and the public concert will be livestreamed for free from its traditional home stage in the Dennison Theatre on Thursday.

It will feature some players you may know, such as celebrated piano phenom David Morgenroth, a longtime heavyweight in the local music community, and can serve as an introduction to relatively newer transplants and accomplished performers like guitarist Jeff Troxel and bassist Tommy Sciple.

Starting last fall, the UM Jazz Program has presented video concerts from the Dennison in lieu of in-person events. Tapper said the jazz program would like to continue a video option after more normal offerings continue because of the added geographic reach.

“We’ve had concerts where we’ve had people from Massachusetts to Alaska, you know, they love it,” he said.

Locally, they’re presenting one of the few options for a genre made to be heard live. While spring in Missoula is usually a prime season for jazz, that’s not the case this year. The annual Jazzoula Festival, a weeklong series of concerts spotlighting all the local talent, was called off due to health concerns — it’s normally held in the parish hall at St. Anthony’s Church, with a club-like atmosphere, buffet, and often five to six combos a night.

The DeFranco Festival’s concert has been affected as well. Normally, they invite a sextet’s worth of guest artist/educators from out of state, who come to Missoula to work with students and then perform a public concert with the top student ensembles in various categories.

This year, the guests are working with students remotely, so for the concert, the UM faculty and students are taking the spotlight. The faculty include Morgenroth, Troxel and Sciple, plus Tapper on trombone, Johan Eriksson on saxophone and Robert LedBetter on drums.

They’ll perform together, and with student groups like the big band and the top two small combos.

The program will cover classic material across eras and styles, with a continuing focus on important arrangers. Earlier in the semester, one concert featured works by Sammy Nestico, an influential chart-smith who died in late February. He’s widely recognized for his work with the Count Basie Orchestra, and the gala concert will feature some of his pieces.

The students then began working on pieces by another influential arranger, Bill Holman. The big band will play his buoyant interpretation of “St. Thomas,” Sonny Rollins’ classic, calypso-inspired tune, with features for Morgenroth and Eriksson.

Bassist Christian McBride’s “Brother Mister” will get the big-band treatment as well, with LedBetter and Troxel out front. McBride recorded the tune for his 2012 album, “The Good Feeling,” which won a Grammy Award for best Best Large Jazz Ensemble Album.

Sciple will take the spotlight on “Tricotism,” a tune by bass great Oscar Pettiford.

Jolene Green, a sophomore in jazz studies, plays second tenor saxophone with the big band on “St. Thomas” and “Tricotism,” among other tunes. She said she was “really happy that we were able to do any concerts at all” this year. While the livestreaming process is complicated, “it’s really just nice to be able to play a concert.” (It can be more stressful knowing that it’s being recorded, and playing to an empty room, though.)

On the upside, it’s allowed her to listen back to her work and analyze it. It’s also allowed her grandparents in California to watch, which would never happen otherwise.

Outside of the jazz program, she’s really only able to have jam sessions with friends these days.

Green grew up in Whitefish and stared playing when she was 12. She “loved it, and never wanted to stop.” After investing more time, she pursued it for college — playing in bands, perhaps touring, opening a studio, teaching. (She likes to play neo-soul and indie in addition to jazz.)

She’s glad the festival is able to keep going during the pandemic — when she was in high school, they would come down to play and see the guest artists.

“It’s nice to be able to play in it now and be on the other side,” she said.

The concert is one night, but the festival itself is a month. Tapper said the semester has involved generating plans and then adjusting on the fly, and the festival is no different. Typically, bands from around the city, state and region come to Missoula to work directly with the artists. This year, travel wasn’t an option. And some groups might not be rehearsing together yet, while others are.

Tapper, with Heather Adams, a choreographer, dancer, director, and founder of the Downtown Dance Collective, began looking at ideas for a format that didn’t rely on scheduled Zoom master classes, since students and educators have to use it so much already.

They recorded a library of 35 videos available free to educators on YouTube, where the faculty teach everything from “improv to masterclasses on an instrument to a series called ‘What’s in Your Case,’” he said, where high-schoolers learn about everything they need to have on hand going to a gig. About seven to eight schools signed up for those features.

For schools that are able to rehearse, there’s another option. They can submit videos of their group performing. Then they’ll get sent to adjudicators — professionals and educators around the U.S. They include Ellen Rowe of the University of Michigan; Paul Harshman of Seattle; Steve Owen of the University of Oregon; Steve Roach of Cal State University in Sacramento; Mike Dana, a retired professor from Fresno City College; Bob Washut of Northern Iowa University (also retired); Erik Applegate of the University of Northern Colorado; and Michael Sakash of Portland, Maine. The band directors, about 18 hailing from Washington to Maine, can also request one-on-one time with the clinician about their work.

A particular adjudicator will work with the students via Zoom on their performance.

“This is an opportunity where actually kids can get (what) they're missing out on — the interaction of going to a festival and meeting a clinician,” Tapper said.