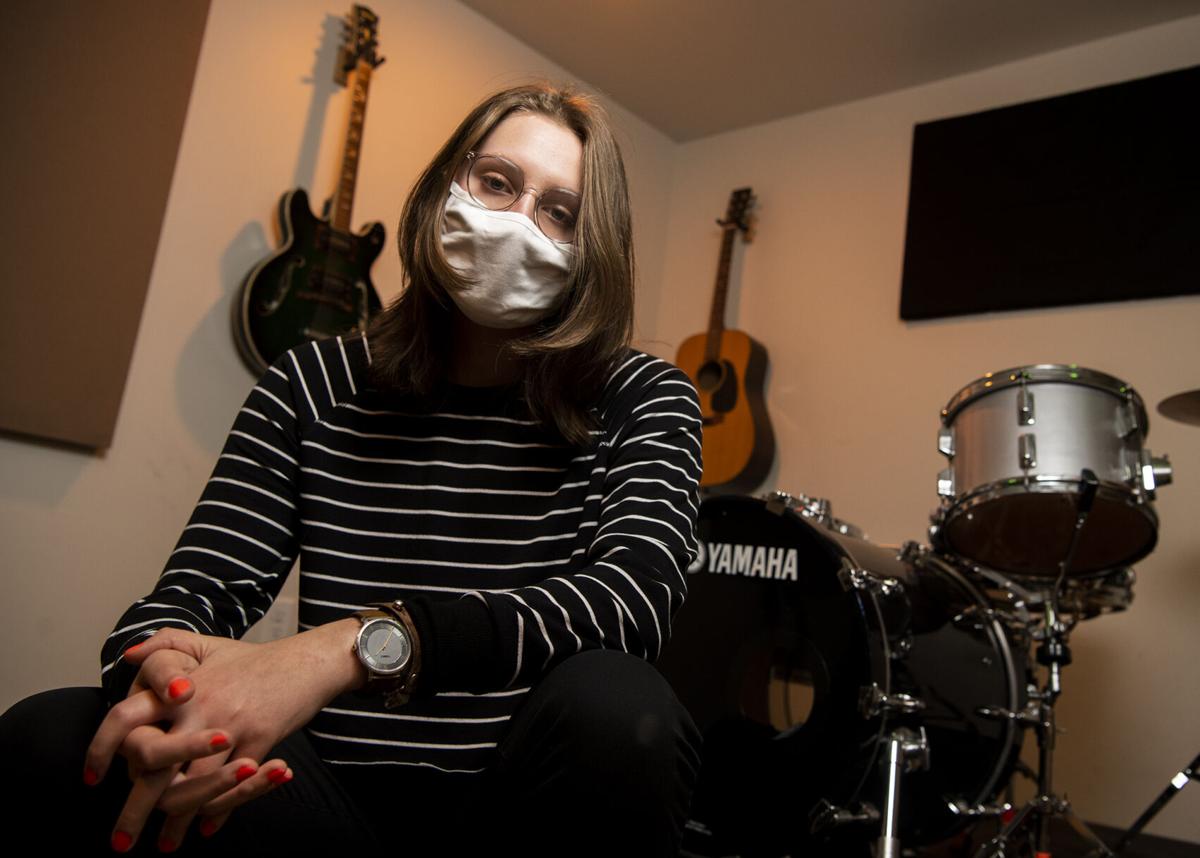 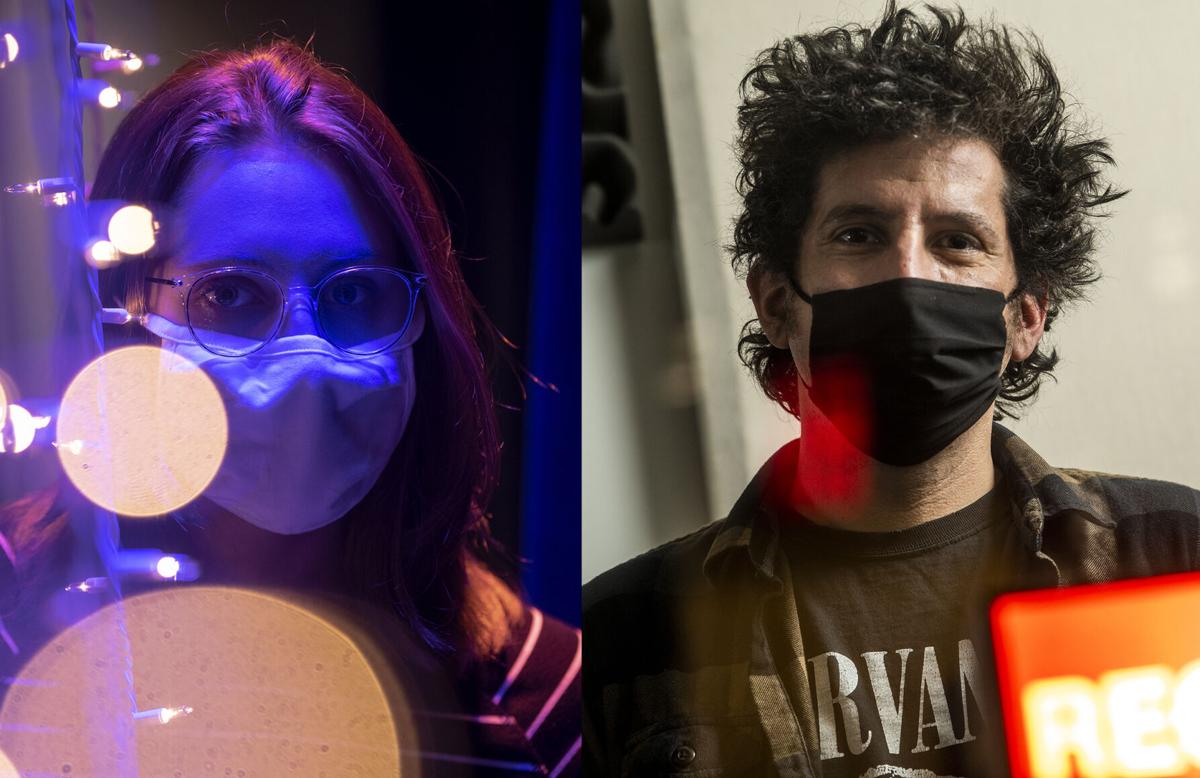 Szalda-Petree, left, is a camp counselor at the ZACC. Christopher Baumann, right, a ZACC event technician and recording engineer, produced the new album, "Backyard," which will be released via live-stream on Saturday.

Szalda-Petree, left, is a camp counselor at the ZACC. Christopher Baumann, right, a ZACC event technician and recording engineer, produced the new album, "Backyard," which will be released via live-stream on Saturday.

While it’s a “weird time to make an album,” Erin Szalda-Petree did anyway.

She had the songs and the voice. She knows musicians, like her fellow instructors at the kids' music camps at the Zootown Arts Community Center.

They had access to a studio, located downstairs in the building, which they helped break in with the debut release. Upstairs, there’s a stage set up to live-stream a show.

Szalda-Petree’s new project, under the name ESP, is putting out the creative results, an album called “Backyard,” this Saturday online with a live-streamed release concert.

Despite the distractions and occasional worries that accompany group activities these days, she felt they did it a safe, socially distanced way, and “we were doing something beneficial for us, even to be down here, creating and making art — but also perhaps for the community when we get to put it out,” she said.

The eight tracks foreground her expressive voice and melodies and reflective lyrics, some of which dip into the anxiety of the pandemic, backed with the energy and feel of a collaborative rock band.

“It makes me happy," she said. "I’m really glad there are other people a part of it. It makes it way more meaningful to me. And obviously we did it during a crazy time. There were challenges with that. With wearing masks, and finding the time to make it. But again … it has been so fulfilling."

Szalda-Petree grew up in Missoula, steeped in harmony-rich folk and country music by the Dixie Chicks, the Indigo Girls and Brandi Carlile. During middle school, she began playing a genre with a different take on vocals: punk. Now an undergrad at the University of Montana, she continued playing with indie rock bands while writing hundreds of songs for herself, many of which might not mesh with a group she was playing.

She’s also a seasoned instructor at the ZACC’s kids' music camps, where she started teaching when she was 15.

“Backyard” is the first record through the gate at the ZACC’s new studio. The nonprofit moved into its new headquarters in the Studebaker Building last October. Among the renovations, they built a studio in the basement for use by its kids' camps or local bands. They hired Chris Baumann, who’s been engineering albums in Missoula for years through his Black National Recordings, to run it and help operate the Show Room event space.

He heard Szalda-Petree play some of her songs for the campers early in the summer.

“I just remember just being so blown away by the songs you were playing. Can we make a record?” Baumann said.

The studio has room to spread out, with a funky carpeted main room, and auxiliary separation rooms. It’s professional but simple and DIY, Baumann said, and produces a high-quality sound that he feels is among the best work he’s done. The studio, available for rentals, is also the home to upcoming releases from the Best Westerns and The Foilies, and Baumann said he's as busy as he's ever been.

From an initial idea for a recording, "Backyard," grew into a collaborative effort.

“Everyone who plays on the album was working as a rock instructor this summer," Szalda-Petree said. "So we were all here, spending a lot of time together every day, all day."

They recorded primarily in August, on weekends or evenings, with hurdles that normally wouldn’t emerge. They masked up to sing, or used a giant Plexiglass barrier, spread out, and cut overdubs.

When she writes songs for her voice and guitar, they’re often slow. With the group, they organically evolved. She likes the juxtaposition of an upbeat, energetic backing with sadder lyrical material and strong vocal harmonies from her folk and country influences.

“I’ve written a lot of songs, probably hundreds of songs in the past six years, and we looked at the ones that we liked the best and were the most meaningful,"  she said. "We weren’t really even concerned with how it flowed or if they were matching genre. But I tried to be myself and make something I really enjoyed personally and that I would listen to … be proud of.”

Four of the songs were written during the pandemic, which she said is present in the mood.

“You can’t see a lot of the people you normally see, and there’s just a lot of time to reflect on what you’ve done, or people that used to be big parts of your life,” she said.

The opener, “Reptilian,” is “about being anxious about who you are [and] what you want to the show the world,” she said, and a desire to hide that she’s felt during the pandemic.

“Before Dark,” one of the harmony showcases, is about “a foreboding feeling that just sticks in your stomach,” she said, and “not knowing what’s going to happen next, pretty much ever.”

“Afterwards” relates a feeling of dread driving along Montana highways, inspired by a trip to Lincoln. She and her brother counted the roadside crosses on the way up. Details that point to a similar lived experience is a quality she loves in local music, she said.

While in-person concerts are off, ESP will have a live-stream at the Show Room on Saturday for the ZACC's "Social Distance Sessions," which go on Facebook Live and YouTube. (See box). Along with “Backyard” songs, they'll play ones by the rock camp students.

Some of the kids have written about the pandemic, others refuse to go topical, yet they never display "any boundaries" in their creativity, she said.

"Doing the rock camps this summer was especially fulfilling because we got to provide that opportunity with kids," she said. They can help them "express themselves in whatever way the want to," whether it's songs about COVID or another popular topic: "You know, talking about aliens."

ESP will hold a live-stream album release show at 7:30 p.m. Saturday, Dec. 5, during the “Social Distance Sessions” at the Zootown Arts Community Center’s Show Room. To watch, go to the ZACC’s Facebook page, or MCAT’s YouTube channel or Local Live. It will be archived after the live premiere. It's free with donations suggested at givebutter.com/g98kJK