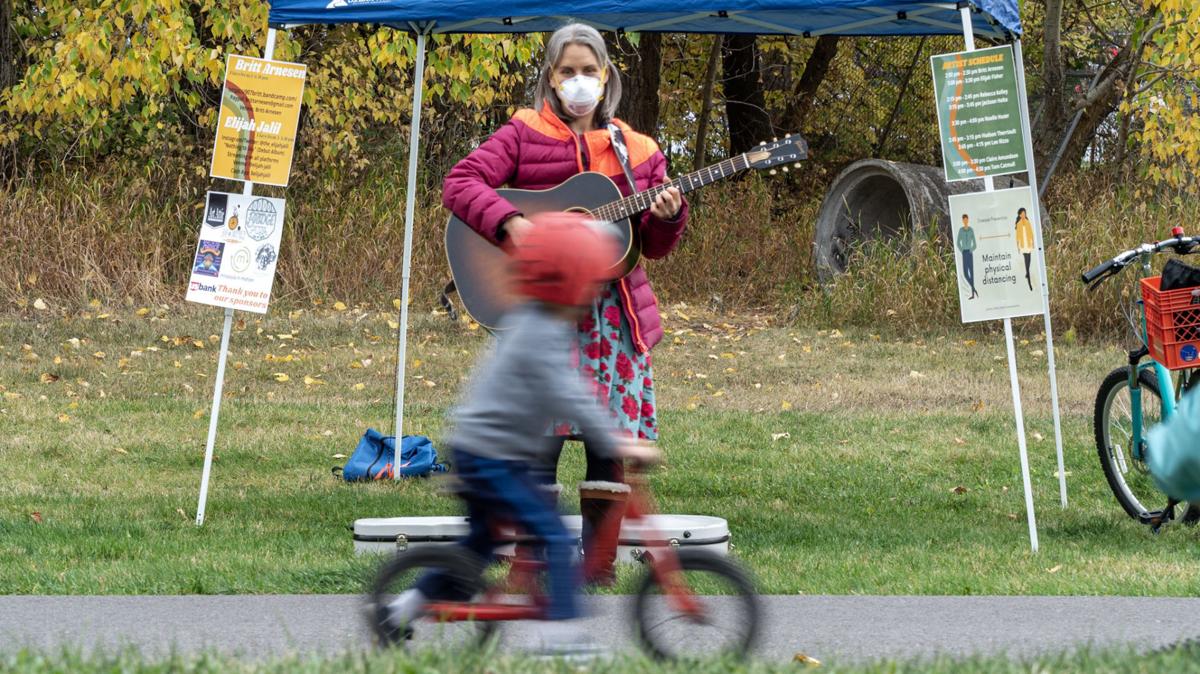 Brit Arnesen performs during last year's "Miles of Music" on the Milwaukee Trail. The event, in which performers play along the path, returns this Saturday, July 10.

The "Miles of Music" map and schedule for Saturday, July 10.

Brit Arnesen performs during last year's "Miles of Music" on the Milwaukee Trail. The event, in which performers play along the path, returns this Saturday, July 10.

The "Miles of Music" map and schedule for Saturday, July 10.

Walk or bike next to the Clark Fork River and hear 11 acts along the way during Saturday’s “Miles of Music” on the Milwaukee Trail.

“You’re able to get outside, get on the trails, and then you get live music while being along the river. It just is pretty unique,” said Maria Zepeda, a songwriter (Why We Came West) and executive director of the Montana Area Music Association.

They’ll have staggered start times with sets of 20 to 30 minutes. Just start out at the Madison Street Footbridge at 2 p.m. and head west, veering right to take the forested loop before the Orange Street Bridge and then winding back toward the last stop by the Boone and Crockett Club at 5 p.m.

The acts are mostly solo or duo, all of whom responded to an open call. They will play unamplified to comply with sound ordinances. Most are songwriters but Writesel, the saxophonist from the group Letter B, and Goodvoice, a Pikuni flute player from Browning, help “spotlight other forms of artistry as well,” Zepeda said.

MAMA, a nonprofit musicians education and advocacy group, held the first such concert last October, when almost all indoor music venues were closed and winter was looming. It was a rare chance to play or perform live music, and despite some harsh wind, somewhere between 50 and 100 people turned out.

The weather will be hot this go-round, but they hope even more people turn out, perhaps catching the acts before or after hitting the river. And don’t forget the after-party: Erin Esse and the Recession Special will play from 6-8 p.m. at Imagine Nation Brewing.

'Music in the Sound Garden'

Besides “Miles of Music,” MAMA has also teamed up with the Roxy Theater for a weekly local artist showcase called “Music in the Sound Garden,” out behind the main theater building in its outdoor space.

The next installments are songwriters Jackson Holte and Dusty the Kid on July 15, and trombonist-composer Naomi Moon Siegel on July 22. Tickets are $15. The seats can be spaced out and there’s plenty of room. The shows start at 8 p.m. and run until around 9:30 p.m.

Zepeda said the Roxy has been generous, charging only $1 of the fee and running concessions. The theater has also been working with MAMA to give performers the stage before Hip Strip Movie Nights on Sundays at the Missoula Senior Center. For more information on those events, go to theroxytheater.org.

Start at the Madison Street footbridge on the south side of the river and head west.

They Want Us Dead