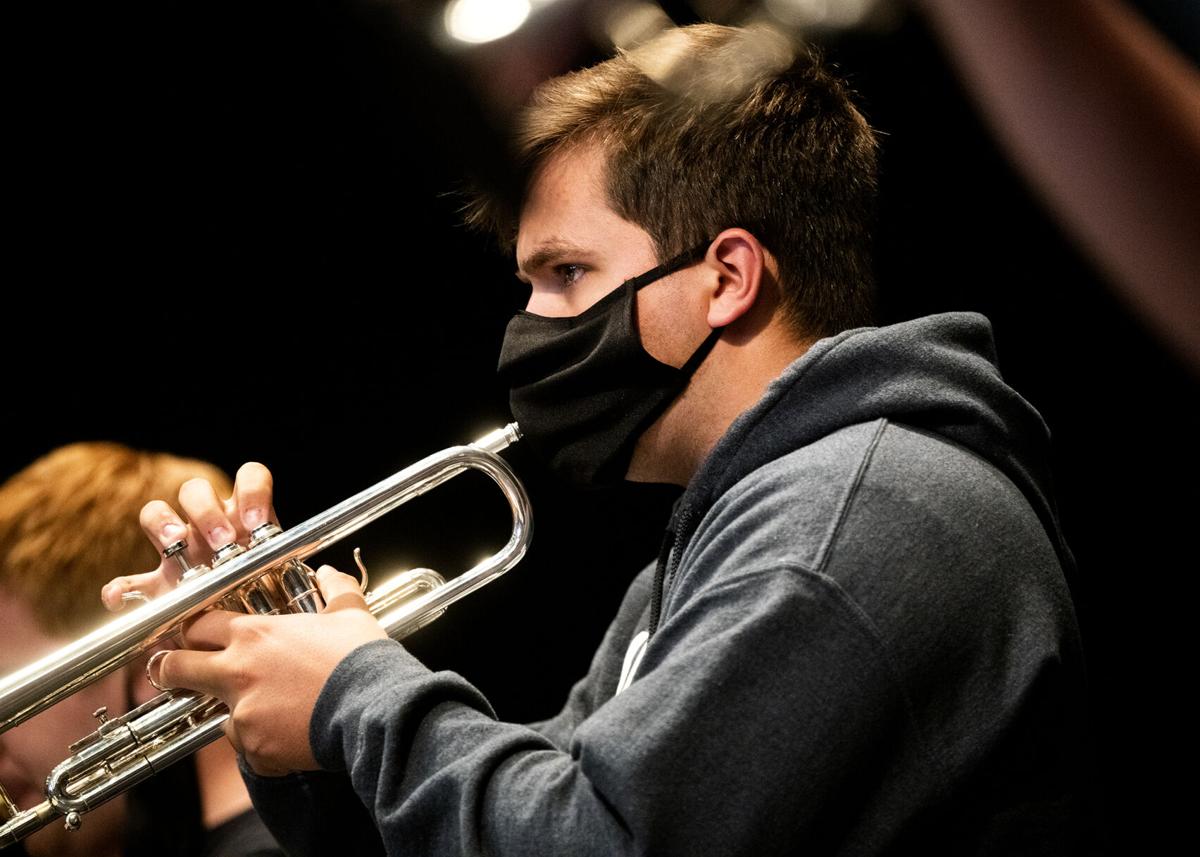 Peyton Riska plays a trumpet during his jazz band's rehearsal at the Dennison Theatre on Tuesday afternoon. The University of Montana's Jazz Program had to restructure this year's concert schedule, which includes the "Jazz and Justice" concerts, three virtual shows focusing on music from the 1960s with an emphasis on the social context of the times. 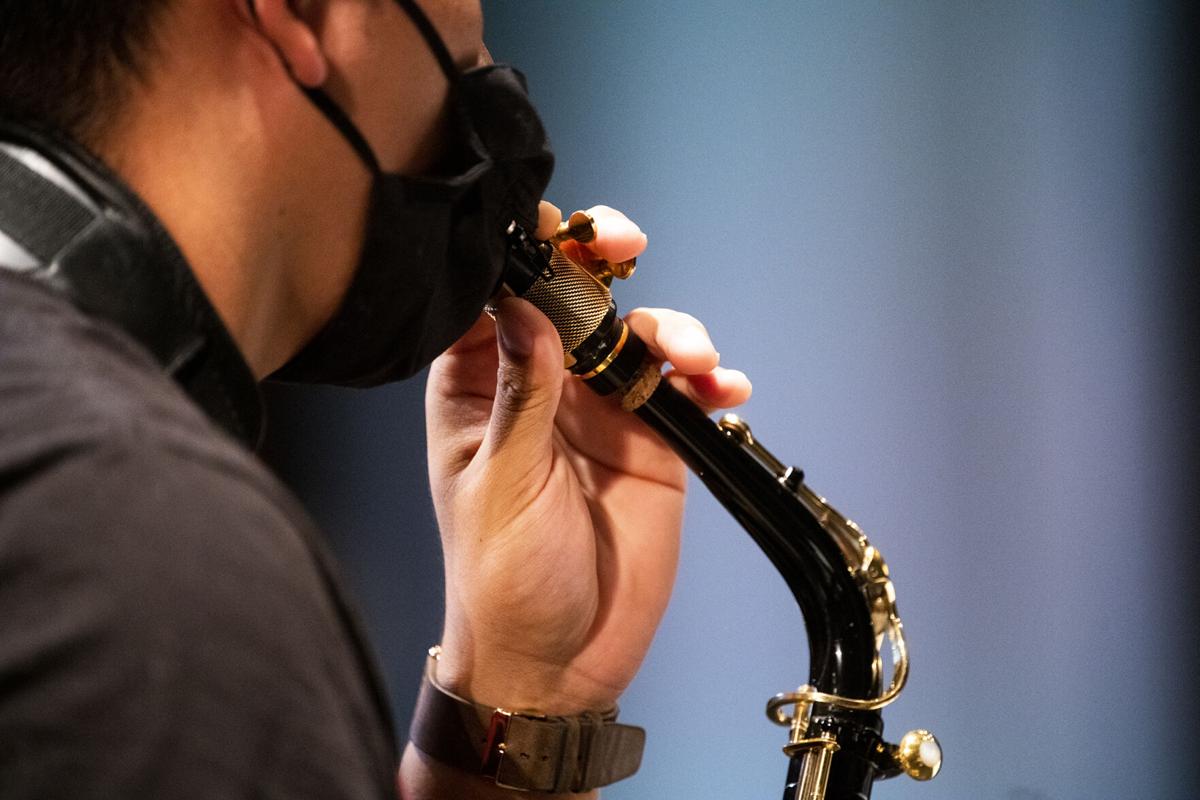 Antonio Jarvey adjusts the mouthpiece on his saxophone during rehearsal. Members of the band are required to wear masks, some of which have special slats for wind and brass instruments.

Peyton Riska plays a trumpet during his jazz band's rehearsal at the Dennison Theatre on Tuesday afternoon. The University of Montana's Jazz Program had to restructure this year's concert schedule, which includes the "Jazz and Justice" concerts, three virtual shows focusing on music from the 1960s with an emphasis on the social context of the times.

Antonio Jarvey adjusts the mouthpiece on his saxophone during rehearsal. Members of the band are required to wear masks, some of which have special slats for wind and brass instruments.

The stands will be deliberately empty on Friday when student big bands take the stage at the University of Montana's Dennison Theatre.

The audience can watch from home, but not in person, one of the many changes the Jazz Program and School of Music have made this semester, along with distanced rehearsals and spaces, specialized masks and covers for horns and woodwinds, and more.

Last March, rehearsals for most large ensembles were called off, and it was questionable when they might return. It was a "scary" prospect for Aiden Robinson, a music performance major, who was fearful of a final year in school in which he might not get to play much at all.

With the redesigning of classes and rehearsal spaces, "we’ve been able to get some semblance of what we used to have, which is amazing I think," he said.

The new "Jazz and Justice" concerts are "a result of having to reshape what's going on this semester, and it's obviously apropos of what's going on in the world," said Rob Tapper, director of the Jazz Program.

They had to scrap a planned concert calendar, which normally would include guest artists.

In its place, students from the big bands and seven smaller combos will perform three concerts, focusing on music from the 1960s and more emphasis on the social context of its originators.

"All of the music has been created and composed by Black artists," Tapper said, and most had a "strong voice" not only in music but "also for what they believed in in terms of humanity and equality" and taking stands for civil rights. They include Duke Ellington, Count Basie, Ray Charles, Herbie Hancock and Thelonious Monk. Students will give introductions based on their efforts to get "in a little deeper with this music" and the composers.

Robinson, a saxophone player who's lead alto in the top big band, has been focused on John Coltrane's spiritually themed "A Love Supreme," which he released in 1964, in the midst of the civil rights movement, and after a period of personal tumult, having overcome drug and alcohol problems.

"I just find the message is really important, especially in times right now where it seems like we could all ... be looking for that," he said.

As a student, he said it can be easy to overlook the social context of the music because of the technical demands. "Do your scales, and make sure you know your licks, make sure you can play this piece perfectly," he said.

"I've had to remind myself a lot to step back and realize that music has a greater meaning than all that," he said.

Given everything that's happening in the world, Tapper said he wants the students and audience to have time to reflect more deeply in that way."I think everybody’s finding themselves editing in terms of kindness. I think everybody’s thinking, maybe I was kind before, but maybe I need to be more kind and more accepting," Tapper said. They'll have two more installments this fall that will be pre-recorded instead of live.

Playing in the Dennison sans audience won't be a new experience. The big bands, which include up to 18 students, rehearse there now. They can space out on stage instead of a normal concert formation. The instructors use microphones so the students can hear them from a distance. There are shorter rehearsals, and set time limits between them.

The smaller combos use the Dennison or the Music Recital Hall. For private lessons, Tapper said he'll use a larger room in the school instead of his office, since his instrument, the trombone, is "the biggest culprit" regarding aerosols.

James Smart, the director of bands and a trumpet professor, said safety measures like these were made across the school for the fall semester, that together mean "playing instruments is essentially as safe as being masked and talking at a distance."

They calculated the air changes in the rooms and bought air purifiers to bring them up to standards.

They also tracked down the masks and bell covers from Director's Assistant, a company in Dallas, Texas, that are sewn from recommended fabrics, based on studies by the University of Colorado and the University of Maryland.

The company also makes special masks for brass players that have two overlapping layers of fabric that can be moved to the side with enough room for a mouthpiece. The design allows the students to quickly transition from playing to talking.

"In a rehearsal, you have to have a dialogue," he said.

The masks for woodwind players, made by a different company, have a zipper that allows room for a mouthpiece while keeping the musician's nose covered. Robinson said he's had no trouble breathing while playing with the mask on. Instructors have to give more time for players to get ready, though, because if the students try to get the mouthpiece in place too quickly, things can go awry.

"I lost six reeds at the beginning of the semester to that," he said.

The University of Montana Jazz Program is presenting a concert, "Jazz & Justice," with big bands playing music from the 1960s, on Friday, Sept. 18, at 7:30 p.m. It will be streamed from the Dennison Theatre. To buy tickets, go to https://www.showtix4u.com/event-details/40085

15 Missoula albums to check out on Bandcamp this Friday

MASS FM, 'What Will Divide Us is Love' EP