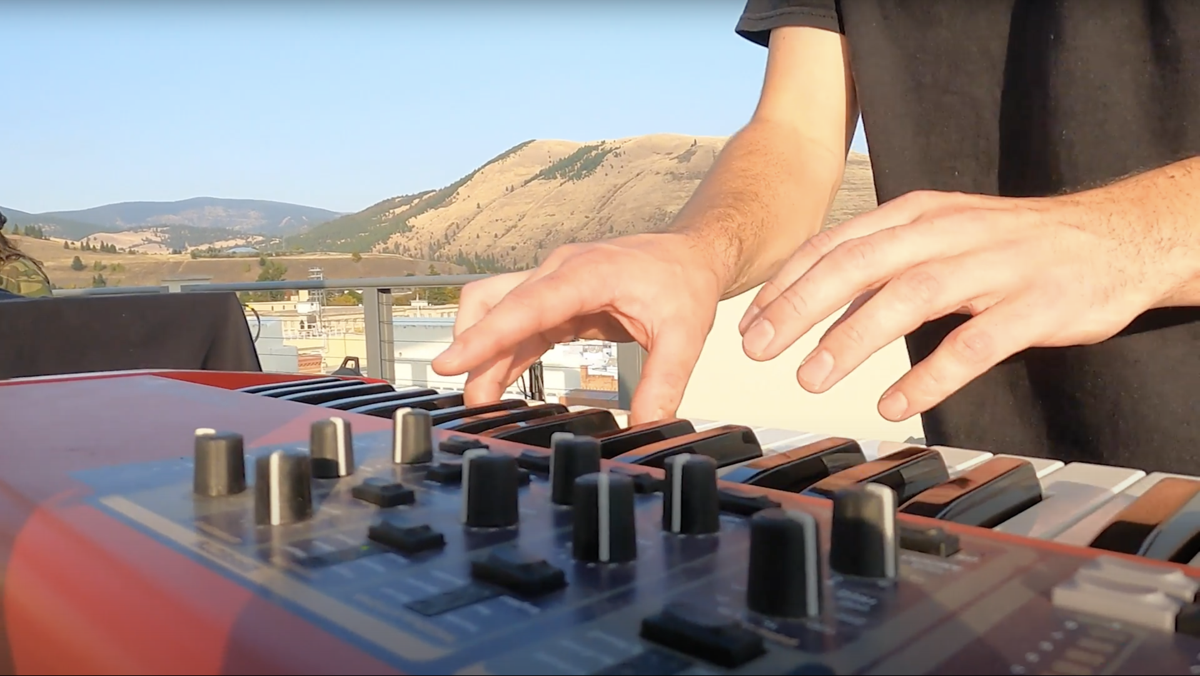 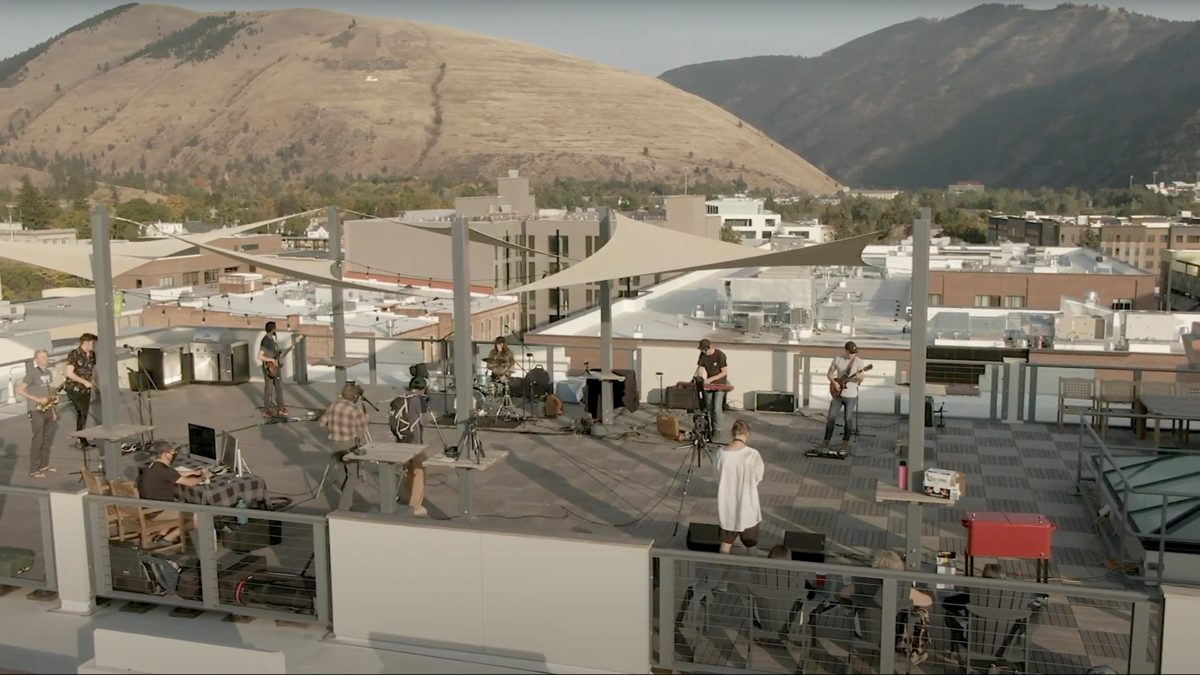 The Noise Gate Studio used a drone to film as well as handheld cameras. 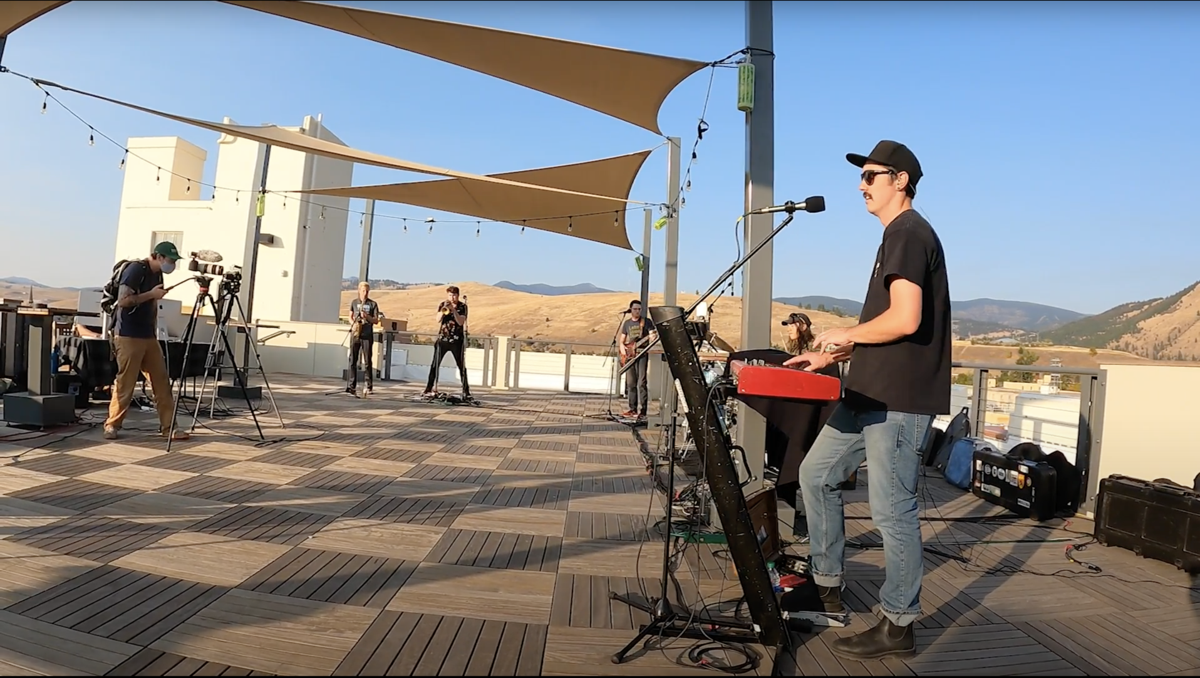 The concert was shot on First Friday in October. 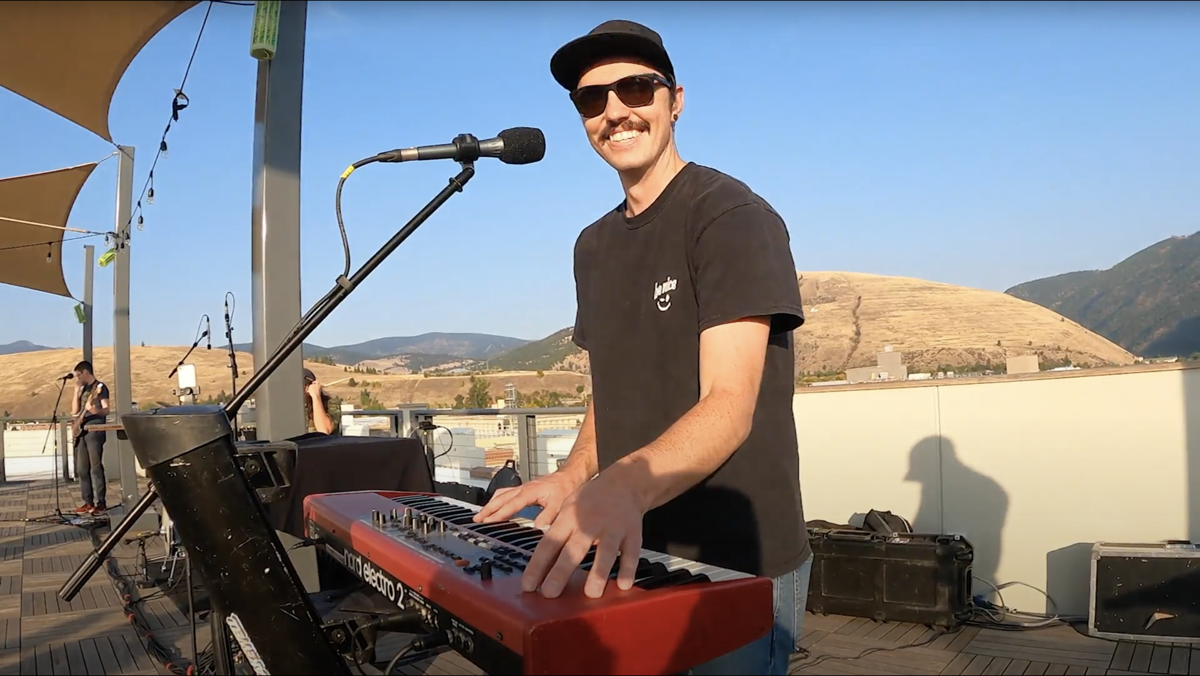 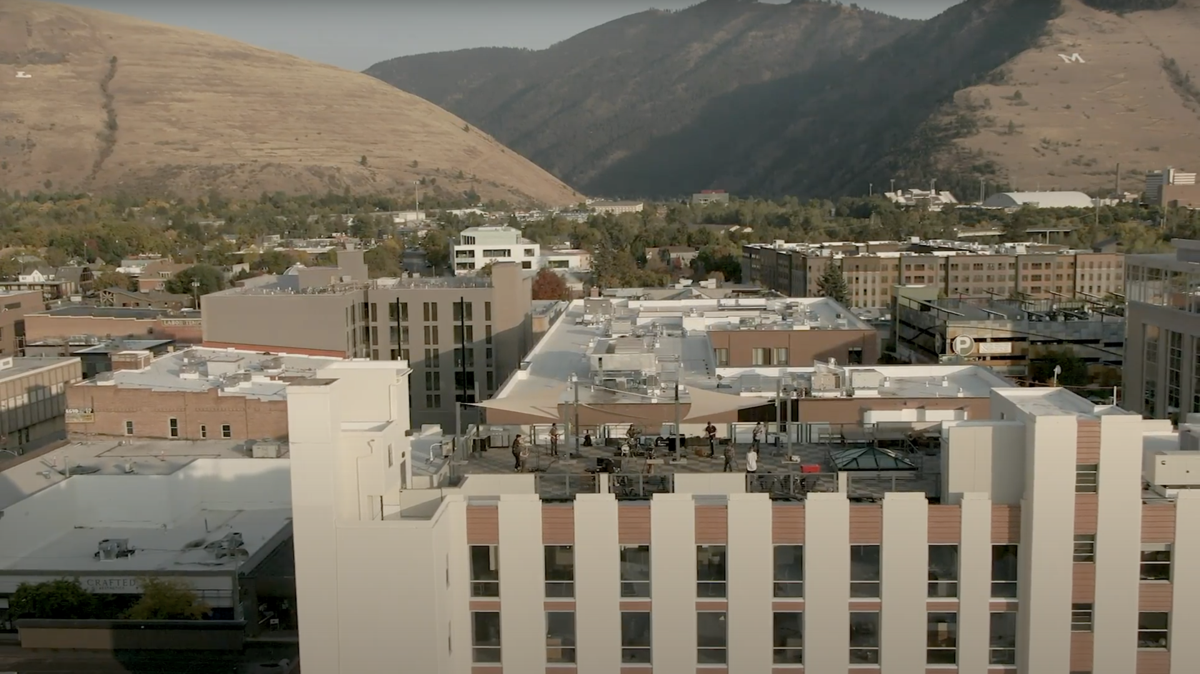 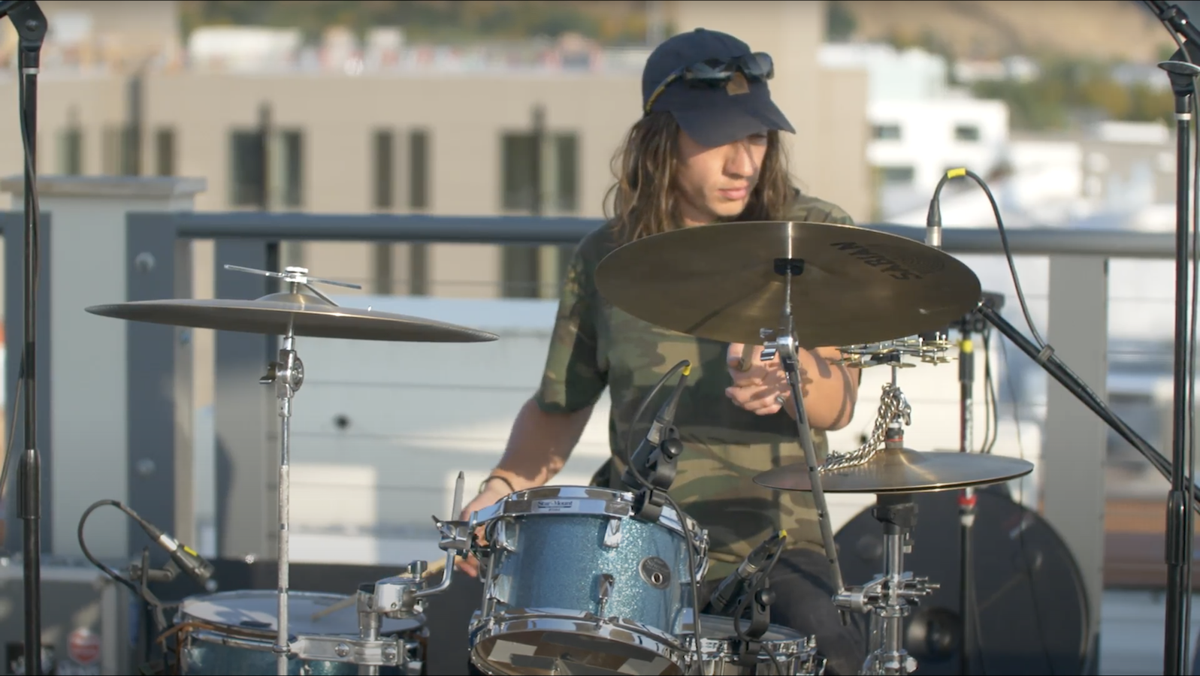 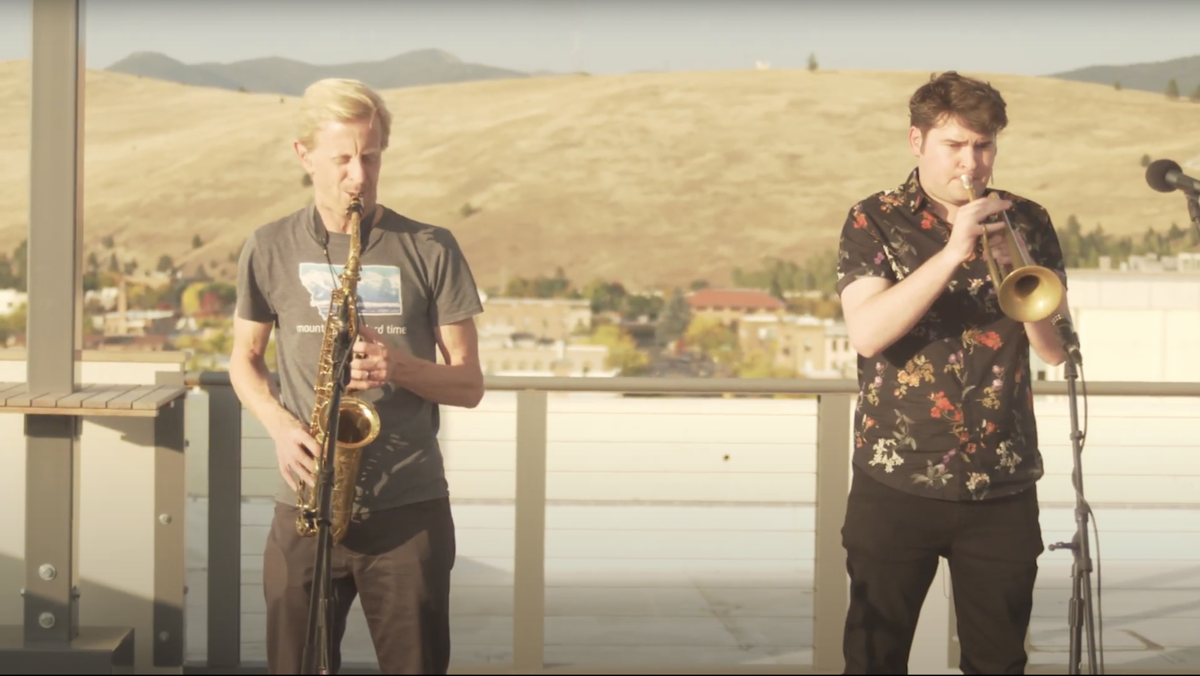 The horn section is Dylan Dwyer, left, on saxophone, and Nathan Crawford on trumpet.

The Noise Gate Studio used a drone to film as well as handheld cameras.

The concert was shot on First Friday in October.

The horn section is Dylan Dwyer, left, on saxophone, and Nathan Crawford on trumpet.

On a sunny Friday in early October, the members of the funk band Shakewell headed up to the roof of the historic Florence Building with a team of engineers and a film crew. Hand-held cameras zoomed in on the six-piece band’s horn players as they played riffs to the effusive songs. A drone hovered above the group, locking in views of Mount Sentinel and Jumbo.

There were no audience members allowed on site as they put on a full show, one of the few that group has been able to play since March — it was the pilot run for the Hellgate Music Series, a new virtual concert project that premieres this Saturday.

It’s a joint venture between professional engineers, Matt Olson of Attack and Release Sound and Studio and Adam Winger of The Noise Gate Studio, who are looking for sponsorships to make the project viable through the long winter ahead.

Olson, a Missoula sound engineer, had seen his weekly business and passion running the boards at local venues get sidelined during the pandemic. Then he met Winger, who specializes in livestreaming, and they decided to team up on concerts, with a few goals in mind: cool locations, great local bands, high quality sound and video.

“We wanted our project to stand out, and the visual element, as well as having good audio, are two super-important things to capture a viewer’s interest,” Olson said.

Relying on connections, they got access to the Florence roof. They then received enthusiastic responses from other sponsors eager to help musicians in hard times, filming at the Missoula Art Park, the Stargazing Room at the University of Montana’s Payne Family Native American Center, and put on a show at DraughtWorks Brewery’s parking-lot beer garden.

“We were always putting ‘Austin City Limits’ as our standard, and obviously that’s a very high bar to reach,” Winger said, especially with small crews that are donating time.

In the Shakewell video, you can see close-ups of the gear, and hear nuances in the music, that might not be as obvious at a Missoula concert with a boisterous crowd.

The first series of five pre-recorded concerts starts on Saturday. Then, starting on New Year’s Eve, they’re switching to a true livestream with another funk band, the Fertile Crescent, followed by four more entries.

If it’s to continue beyond that, they’ll need sponsorships, which they’re actively pursuing.

Right now, the venture is entirely self-funded, with the bands, engineers and camera operators donating their time.

“If we pick up a sponsor that is ready to say, ‘Hey, we want you to keep doing these,’ we’ll do one every week,” Olson said.

Instead of a ticketed-link model for the shows, they’re posting the full videos on YouTube, and they’ll remain free after the premiere date.

“We want to be on the leading edge of still being able to provide live music, even if it’s in a bar with nobody in it, as long as people are aware about it,” Winger said.

The seeds of the project began not on a rooftop but months earlier, in one of the places you’d least expect to hear a live funk band — on a barge floating down the Salmon River.

The band invited Olson to do sound for the trip, aboard a specially built raft constructed by a friend, said Shakewell guitarist Emmet Ore. Since the pandemic, “we’ve been forced to be creative,” he said. Besides the flotilla show, they’ve done livestreams from the Rialto in Bozeman, began writing a new album, and working on side projects. Olson said he was a bit skeptical about the barge idea at first — it required a solar-powered battery pack, among other things — but they pulled it off, and he left confident about the potential for concerts even with the limitations of the pandemic.

“I’m coming off this, this summer like, ‘We can do anything. If you really, really put the effort into it, you can make this happen,” Olson said.

He’s been deeply invested in live music for some time. He went full-time with Attack and Release, his professional sound engineering business, in February 2019, working weekly with bands on live gigs or in his recording studio. Going further, he started the Ballroom Sessions, a live concert series in the space above the Union Club that included performances and lengthy interviews about the music.

The pandemic sidelined half of his business, he said, the other half being studio recordings with bands.

He jumped into livestreamed local concerts back in March, arranging for Junior and Izaak Opatz to play from the second floor of the Radius Gallery, and learning the necessary tricks to make a concert played live over an Internet connection sound as good as you’d expect in a venue. He uses techniques, like using in-ear monitors for each musician, that make a significant difference.

Since he’d worked with Shakewell before, they were game to play on the Florence roof in the first installment.

Ore said it was “awesome” to be up there, as the pandemic has “felt strange” on a personal level. At first, it felt like an “extended vacation,” but as it’s worn on, it’s made the old routine of live shows, including full houses at the Top Hat, feel like “distant memory.”

Without an upcoming gig, it can be difficult to keep the momentum and motivation going, he said.

The rooftop show features a number of songs they recorded for “Threepeat,” their new studio album. Originally set for release earlier this summer, they waited and waited before deciding to put it out in December without a normal release show, an un-ideal set-up.

“You spend all this money recording something, and then you want to play it for people,” he said, like “smashing the champagne on the bow of the ship.”

In its place, though, there’s a rooftop concert. Winger wants you to watch it on a TV over a loud speaker system, like an album release show in your living room, or a professional produced television show, and not a webcam.

“When you’re watching TV and cable, you’re engaged because it’s that professional quality — whether you think about it or not, it keeps you engaged,” he said.

The Hellgate Music Series premieres at 7 p.m. Saturday, Nov. 21, with a pre-recorded concert of Shakewell performing live from the roof of the Florence Building. To watch, go to "The Noise Gate Studio" on YouTube. The series continues each Saturday, and will be available on the channel indefinitely after the premieres.

The a new five-part series will start up with true livestreams on New Year’s Eve with the Fertile Crescent.