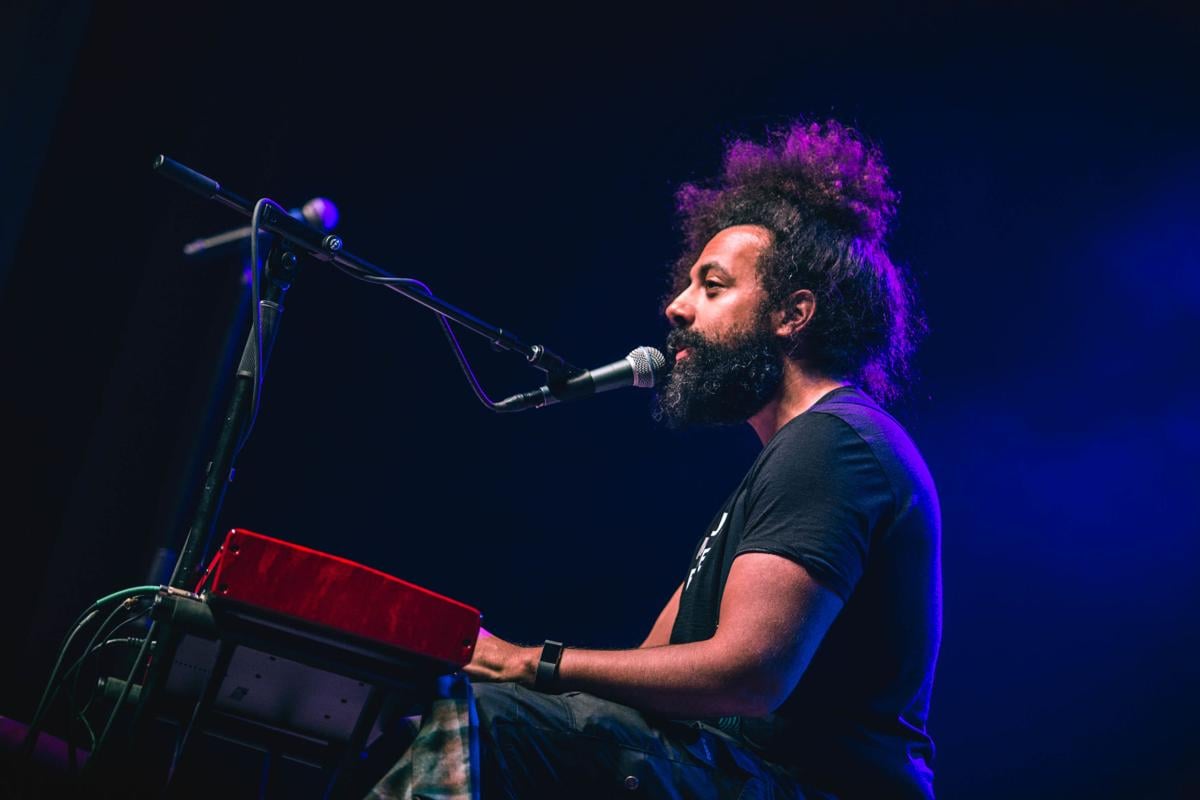 Great Falls native Reggie Watts is returning to The Wilma on Saturday. He's seen here at his December 2016 performance there, now an annual tradition. 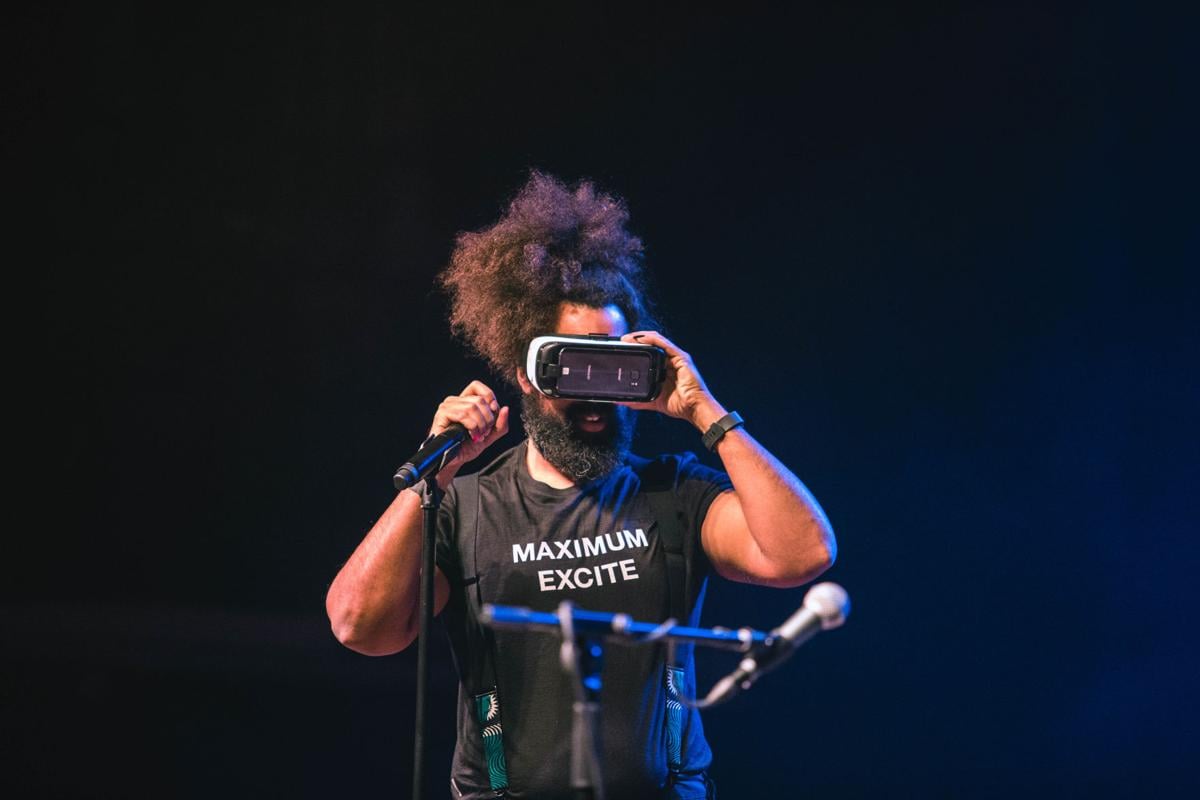 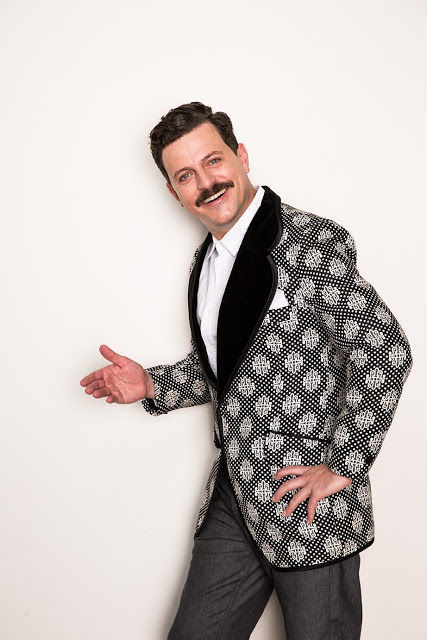 Great Falls native Reggie Watts is returning to The Wilma on Saturday. He's seen here at his December 2016 performance there, now an annual tradition.

As Reggie Watts would say, “the Montana boys are coming back home” for their annual Missoula-catered show at the Wilma.

The vocal artist, comedian and musician from Great Falls has made his holiday stop in the Garden City a regular event, bringing Missoula native Chris Fairbanks along for the ride.

No really — Fairbanks said he gets a ride with Watts in his “small jet” from Los Angeles to Missoula.

“I get a free ride from him. That’s the cool part. I just have to buy a return flight home,” Fairbanks said in a recent phone interview.

The duo has performed a December show in Missoula for four years in a row and plans on continuing the tradition as long as they can.

Watts’ performance is 100% improvised, mixing his own brand of standup with sometimes bizarre ramblings and some music sprinkled throughout. He said his content is often inspired by something he saw earlier in the day.

“It’s really a mix of things that I get exposed to that day or that week or things that have been floating around in my head in the last few months or so,” he said in a phone interview, adding that he can make Montana-centric jokes in Missoula that he can’t make anywhere else.

“That’s fun to get specific,” he said. “Hopefully I’m not repeating myself too much every year, but in that regard, I get to pull that out, and that’s really fun.”

The two admittedly both use the show as an opportunity to spend the holidays with family and friends in their respective hometowns and also see it as an escape from the hustle and bustle of LA.

“It’s a different pace of life, and it’s something I’m familiar with,” Watts said. “I like that it’s slower and you can kind of take your time deciding what you want to do. I can be a little bit more free with my time, which is great.”

Fairbanks agreed, adding his phone doesn’t even get service here, which he loves.

“If suddenly you have the luxury of there being a technical reason you don’t have to get back to anyone, it’s really relaxing,” he said.

Both have friends and family who come to the show every year, something Fairbanks said is nice, but adds unwanted pressure.

“I prefer a room full of strangers, and I know so many people in Missoula, that that isn’t the case. So it comes with some nervousness honestly.”

The pair first met when Fairbanks said he walked by Watts at a festival in Las Vegas and overheard him say to someone else he was from Montana.

“Suddenly I recognized a young version of him in Great Falls,” said Fairbanks, who used to drive to the Electric City from Missoula with his friends to skateboard growing up. “It was kind of weird. I always saw him around the comedy scene in Los Angeles and liked him, but I didn’t know we were from the same state until I heard him say it.”

While Watts’ main gig is bandleader for CBS’ The Late Late Show with James Corden, he’s carved out time in the last year to record a sophomore album with Wajatta, his musical group with LA-based electronic producer John Tejada. Their first single, “Don’t Let Get You Down,” which is also the album name, was recently released and has a more relaxed electronic sound with somewhat softer beats than the duo’s 2018 debut album “Casual High Technology.”

“There’s definitely a couple tracks on there that are a little bit mellower, but there’s definitely some high energy stuff too,” Watts said. “There are some interesting things in there that were not on the first record, some more old school hip hop influence and stuff like that.”

Wajatta is confirming show dates for 2020 and plans to release the full album at the end of February.

Fairbanks is fresh off an October tour and said he has a comedy special in the works, produced with his friend, comedian Tig Notaro, that is in its final stages. He hopes to release it in 2020.

“That’s what I wake up every day thinking about at almost an unhealthy level,” he said.

While in town, Fairbanks said he plans on spending a lot of time with his dad and at friends’ houses — but only the ones who have a Christmas tree or Menorah.

Watts said he usually likes to eat at Biga Pizza and visit Rockin’ Rudy’s. This year, he plans to make a stop at his friend John Wicks’ local java spot, Drum Coffee.

Watts also hopes to tour the new Zootown Arts Community Center downtown. He has a friend who is involved with the organization and in the past has donated proceeds from his show to the ZACC.

Fairbanks is set to open for Watts on Saturday, Dec. 21, at the Wilma. Tickets range from $30 to $40 and can be purchased at logjampresents.com or at the Top Hat Box Office. Doors open at 7 p.m. and the show starts at 8 p.m.

Reggie Watts will be at the Wilma on Saturday, Dec. 21 with Chris Fairbanks for their annual holiday show in Missoula. Tickets range from $30 to $40 and can be purchased at logjampresents.com or at the Top Hat Box Office. Doors open at 7 p.m. and the show starts at 8.

St. Paul and the Broken Bones